It’s time for the top 5 in the 2022 NY Rangers Top 25 Under 25. Again, he ground rules for this list are simple. To qualify, a player must be under 25 years old. It doesn’t matter if this player is in the NHL, AHL, or in any of the leagues around the world. If they are Ranger property and under 25, they were considered.

Remember, this is not a prospect rankings. This list considers NHL players as well, since there are a whole bunch that are under 25 years old. As a personal preference, I do generally rank high ceiling players higher on the list than those who are “safe” or have bottom six projections. I also do heavily weight teenagers with regular minutes in pro leagues overseas, since that is not a common occurrence.

Note: This was written before the Nils Lundkvist news from this morning, where he will not be in camp. I have since edited his blurb.

Original writeup: Having Nils Lundkvist at #5 is likely to irk some people, but his Rangers situation shouldn’t impact his overall prospect valuation. He’s a top-50 prospect in the NHL. His ceiling is Adam Fox-lite, running a PP1 while playing top four minutes. He’s blocked by Fox, and to a lesser extent Jacob Trouba and Braden Schneider. That doesn’t take away from his ceiling as a potential top defenseman.

Added since the news this morning: Had this news broke, Lundkvist wouldn’t have been on the list at all. I still believe Lundkvist will be a solid NHLer, but staying in Sweden is on him, not the Rangers. We all know that teams overweight compete level, but you need to show you can put in the work. Lundkvist isn’t doing that.

Since I can’t re-do the rankings, just shift everyone else up 1 spot. I’ll take the ‘L’ here.

Kaapo Kakko has disappointed a few people who expected him to jump right into the NHL and produce star numbers. While that’s not how things work, Kakko certainly hasn’t put up the offensive numbers people hope for from a #2 overall pick. That’s a fair criticism, but it isn’t fair to label Kakko as a bust based on that one aspect. 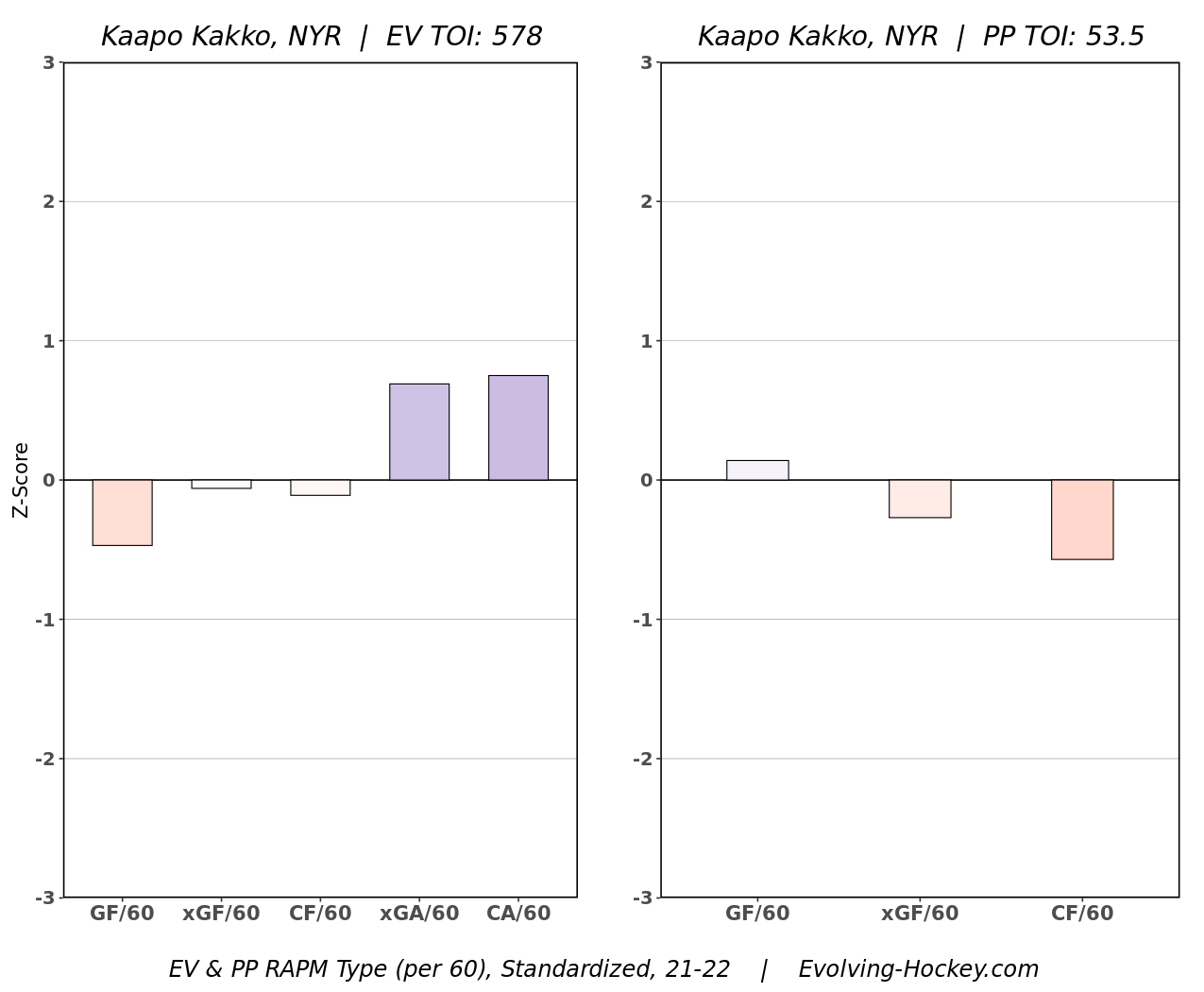 Kakko has already proven he is more than defensively capable at the NHL level, which leads us to believe he, at the very worst, can be a solid top nine shutdown winger. With the Rangers, that may wind up being his role this year. It would be a disappointment for some, but it’s a critical role that competing teams need to make runs.

But something to consider: Kakko’s GF/60 has been far below his xGF/60, which suggests points left on the table due to lack of skilled linemates. There is certainly merit to that argument, as well as lack of powerplay time.

That said, Kakko still has a high ceiling and the Rangers look poised to have a much deeper lineup this year. It’s a big year for Kakko, who as a reminder is still just 21 years old.

What a year it was for K’Andre Miller. We watched him grow in real time into a top four defenseman, and he’s still improving. Miller might be the best defensive defenseman the Rangers have on the team right now, better than Ryan Lindgren. 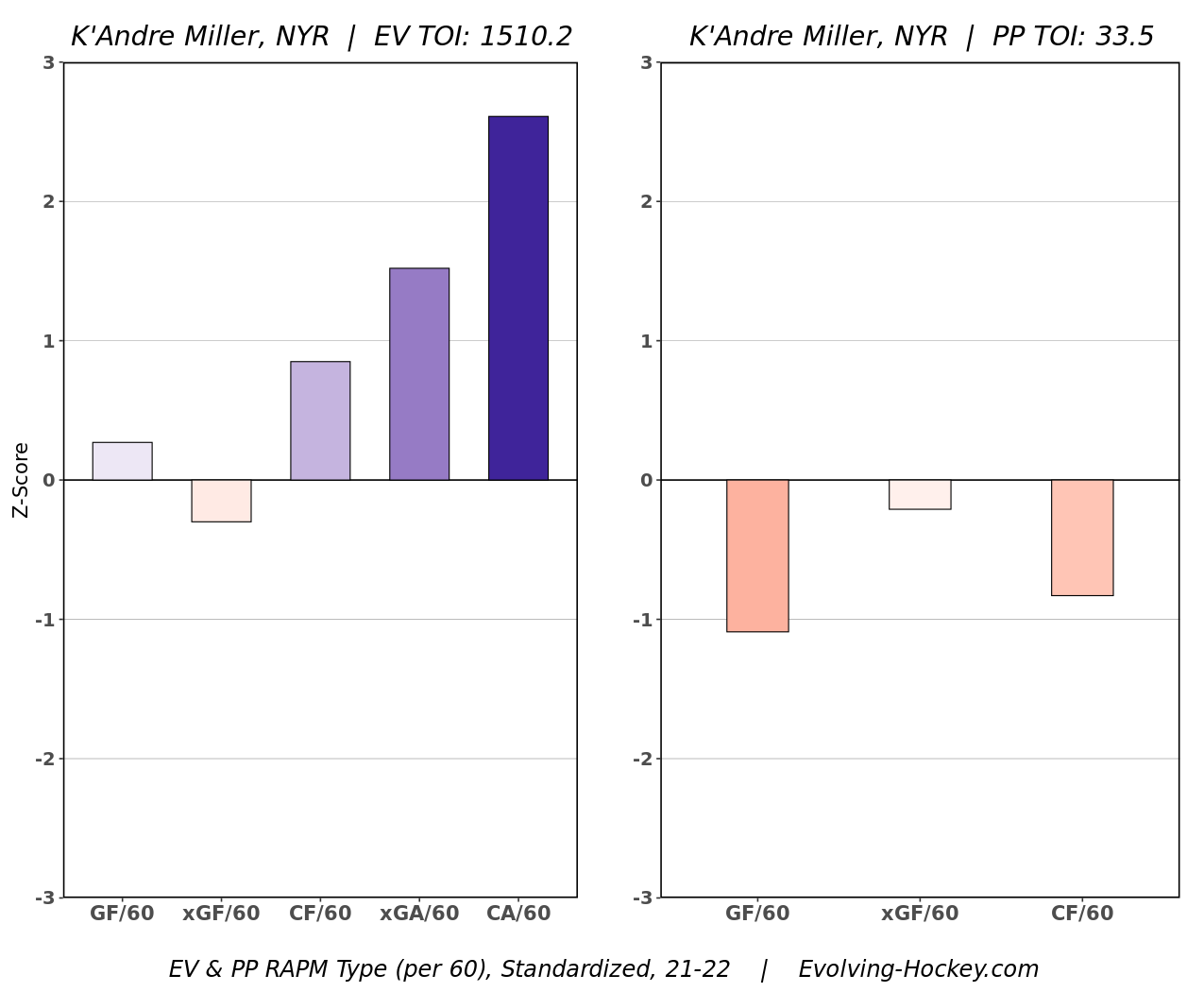 This is just ridiculous, especially when you consider he’s only been playing defense for a little more than 5 years or so. Miller is just that good. Plus, given his skill set as a great skater and puck mover, it’s fair to expect the offensive play driving and raw point totals to continue to climb.

There is a bit of a ceiling with raw point totals, as Miller won’t be PP1 QB while Adam Fox is still here. Regardless, Miller is already established as a top pairing defenseman who will only continue to improve. He’s just 22 years old.

Alexis Lafreniere is going to be a top line forward. He will likely get that chance this season with Chris Kreider and Mika Zibanejad, and he already has chemistry with both. His 19 even strength goals were second on the team to Kreider, and he did it playing third line minutes to boot.

We should see a huge uptick in point production from Lafreniere, especially if he replaces Ryan Strome on PP1. His counting stats will improve just based on ice time at even strength, but it should take a huge leap forward if he’s on PP1. This kid is the real deal.

He’s Adam Fox. Did you expect anyone else to be #1?

But this is also Fox’s last year on this list, as he will turn 25 in February.